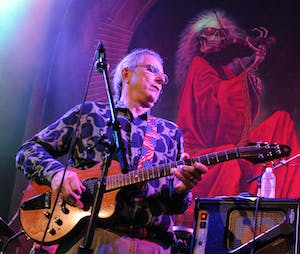 David Gans is an American musician, songwriter, and music journalist. He is a guitarist, and is known for incisive, literate songwriting. He is also noted for his music loop work, often creating spontaneous compositions in performance. He is the co-author of the book Playing in the Band: An Oral and Visual Portrait of the Grateful Dead, and the host of the weekly syndicated radio show The Grateful Dead Hour. He currently co-hosts a radio show with Gary Lambert on Sirius XM's The Grateful Dead Channel called Tales from the Golden Road, a call-in show about the Grateful Dead.

My name is Rob Glassman, a New Haven, CT native, and have been performing in Connecticut, and beyond, for over 20 years.

Currently I perform in 3 bands, two of which I co-front on guitar with RGB and Music Never Stopped.The other band I am percussionist, vocalist, and co-founder of Jen Durkin’s Steal Your Funk. We perform in clubs all over New England

Also, when available, I perform with other bands, either as a percussionist, vocalist, and/or rhythm guitarist.