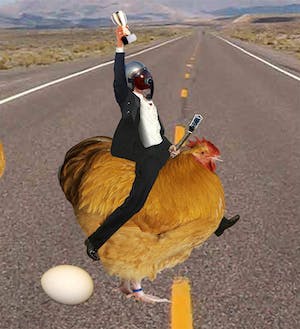 iCal
Google
Come along for a sweat soaked, down home dirty blues ride on a raging punk rock river.

So when you see a man in a jumpsuit and full-face helmet rigged up with a telephone receiver come barreling down the honky-tonk stairs in a lifeboat while beating away on a hollow-body guitar, don’t get out of the way. Jump right in there with him. And as long as you live, you’ll never forget what he taught you.

A man in a human cannonball suit soon appeared from a side door, his head completely obscured by a tinted black helmet, its front welded into a telephone which seemed to wirelessly amplify his voice to the audience. Bob Log III launched into a mind-blowing set, finger-picking his beaten-up black guitar for a sound of steel string blues and heavy rock n’ roll. The sound was reminiscent of Jon Spencer Blues Explosion if it had to be categorised, but his music would be better described as Jerry Lee Lewis crossed with a little of Tom Waits’ heavy industrial sounds.

His guitar growls like a rabies-infested mutt, straight from the backyard of an Alabama whorehouse. The expletives he squawks are absolutely unintelligible, at least while the groan of his six stringed demon viciously dominates the aural realm. When the blanket of perfectly distorted guitar ends, which always coincides with a great victory stance, Mr. Log displays his propensity for what is only describable as ‘not giving a fuck’, which in his case takes the form of the perfect stage presence.

Boobs were dipped in scotch, one fan took an accidental swan dive into the music equipment and Bob Log III managed to play slide guitar, drums and sing while balancing three women on his lap.

Should you never have had the joy of seeing Bob Log III play, let me attempt to describe it for you: picture a man in a shiny blue jumpsuit and a pilot's helmet wired to a telephone receiver, playing slide guitar with all the dirty, scuzzy joy in his heart. Add to that a kick drum and foot cymbal, the myth of a monkey paw in place of a right hand, and a setlist that includes songs named Boob Scotch, Bubble Strut and My Shit Is Perfect, and you'll begin to get the gist. It is loud and strange and electrifying, and how ecstatic it all sounds, that guitar glazed with a kind of sublime and honey-dipped happiness.

One would have to be in a pretty foul mood not to be entertained by the mysterious awesomeness of Bob Log III. Sure, his musical skills are something to behold, his one-man-band brand of blues/Americana displaying dexterity, creativity, and plenty of good old rock â€˜n’ roll, but then there’s his wacky persona. At Monday’s packed Union Hall gig, Mr. Log leapt from behind the curtain that functions as the stage door in his signature getup: a full suit with bits of gold teasing at the bottom, and a dark-glassed racing helmet with a phone receiver wired as a mic. After a quick intro jam he shed the formality to reveal his shimmering gold full body suit, the very rocket man the audience had been waiting for, and burst into “Goddam Sounds Good” off the recently released My Shit Is Perfect.

Bob Log III’s live shows are wild affairs. Bob likes to ride rubber dinghies across the heads of his audience and summon women onstage to stir his whiskey with their tits. nme.com 2009