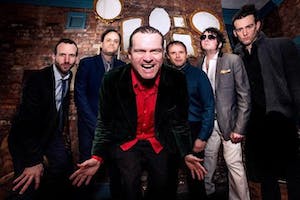 The Devil has always been there. He is the great outsider, the original iconoclast. He is a conniving little shit and never seems to tire of giving humanity a wedgie or a wet willie just for a laugh. The Devil is capable of taking many forms. He can exist as one being or spread out amongst many. He can present himself as an ordinary man or as a horrific cloven-hoofed beast depending on his mood. Above all else, The Devil lives to corrupt, to adulterate, to defile.

Electric Six has often used The Devil as subject matter for its songs because of that last bit, the part about corruption and adulteration. That’s what Electric Six has been trying to do with its music now for quite some time!!!! We want to corrupt young women….just like The Devil!!! There’s nothing more rewarding than the seduction of a young innocent maiden, forcing her to wear demonic dresses, levitating her towards the great fiery skull and watching her eyes turn black as she gives into evil and becomes the bride of The Devil!!!! That….is why we started this band….to help women realize their potential as sexy evil maidens with eyes reflecting the utter darkness of a corrupted soul.

With its fourteenth studio album Bride of the Devil, Electric Six examines the concepts of evil and corruption, humanity’s various falls from grace, the nine circles of purgatory and of course, the internet itself. Bride of the Devil opens with the thunderous opener “The Opener”, a bombastic celebration of the arena rock Electric Six never got to play. The next two numbers are textbook ear worm guitar pop numbers that deal with debilitating income inequality and nepotism (“Daddy’s Boy”) and the horrors of being forced into a pool of toxic waste by an a rabid Doberman trained to kill (“(It Gets) (A Little) Jumpy”).

And then we get to the title track, a radio anthem, where it all becomes clear that The Devil is a metaphor for Russia and the United States is the young girl who is seduced, corrupted and wedded into a Satanic covenant with the beast. It’s all there in black and white. The Carrie Underwood-esque lyrics alongside a backdrop of vodka and caviar and backchannels and Seychllian bank accounts. That’s how they did it. They went after our country performers and got the rubes to feel good about being Russian assets. And still, it is the feel-good anthem of the summer.

Finally, the haunting album closer “Worm In the Wood” is Electric Six at its most serious, most tender and emotional. Haunting. Effervescent. Corrupt. Jaundiced. Tired.

So there you have it. Electric Six is back with its fourteenth record and it’s poppy and feel-good, as well as heavy, both sonically and lyrically. Our sound will corrupt you and enslave you as the beautiful demonic bride you know you truly are. Fraulein, take this severed hand with it’s creepy long nails from the beginning of time. To do so is truly thine destiny.

Come see Electric Six on the “Russia, If You’re Listening” tour this fall and into 2019. Bride of the Devil will be released on Metropolis Records on October 5, 2018 world-wide.

Speedealer originally formed in 1992 in Lubbock, TX. under the name REO Speedealer. Its founding members are James Follis [who named the band] (guitar), Rodney Skelton (bass), Jeff Hirshberg (vocals), and Chris Brown (drums). By early '93 REO Speedealer had run its course and broke up. Both Skelton and Hirshberg decided to return to Dallas, while Follis and Brown remained in Lubbock. Upon their return, Skelton, Hirshberg (now on guitar and vocal duties), Mike Noyes (guitar), Dave Woodard (vocals) and Jason Purtle [RIP]/Toby Sheets (drums) reformed the band. REO Speedealer began to play local and regional shows, which in short order turned into DIY, "get in the van," touring on the national level. In the fall of 1995 the band released its first eponymously titled full length record on Lori Barbero's (Babes in Toyland) label, Spanish Fly -- directly after the release of the record, Woodard split from the band.

The following year the group signed with Royalty Records, and it was at that time that the band began touring nonstop, worldwide, playing over 300 shows per year for the next eight years. 1996 also found the guys in the studio with producer Daniel Rey (Ramones, Gang Green, White Zombie, The Misfits, et al.) recording their second self-titled album. Shortly after the record's release in '97, REO Speedwagon served the band a cease-and-desist order on their moniker. As a result, the band shortened its name to Speedealer. And in the subsequent year, after the departures of drummer Todd Mcglaughlin and guitarist Noyes, the foursome — now consisting of Hirshberg, Skelton, and newly added drummer Harden Harrison (Rigor Mortis) and guitarist Eric Schmidt (Pervis) – recorded and released the Daniel Rey produced Here Comes Death. Just as the album hit the streets, Royalty Records folded, leaving Speedealer without either a label or support for their new record.

The band continued its intense touring schedule, pairing up with acts such as Motörhead, Fu Manchu, The Misfits, Neurosis, and GWAR. After their 1999 performance at SXSW, Palm Pictures A&R representative Michael Alago (who signed Metallica to Elektra) contracted the band to his label. Palm Pictures re-released Here Comes Death in 2000, as well as putting out the band's fourth studio album, Second Sight (produced by Jason Newstead of Metallica), in 2001. Early in '02, Speedealer parted ways with Palm Pictures. During that same year founding member Rodney Skelton left the band; and in 2003 Casey Orr (GWAR, Ministry, and Rigor Mortis) took over on bass and Speedealer recorded and released both Bleed (produced by Jeff Pinkus of The Butthole Surfers, Honky, and The Melvins) on Dead Teenager Records and Burned Alive (recorded live at CBGB, produced by Daniel Rey) on Radical Records.

Following their European tour in the summer of 2004, Speedealer ceased existing as a working, full-time band -- though between 2008 - 2012 members would from time to time play one-off shows, that is until Hirshberg decided in the autumn of '12 that he no longer wished to play live. However, in 2016 Schmidt and Harrison partnered with vocalist Daniel Barron (Swingin' Dicks) and bassist Rick Pearson (The Buck Pets), reestablishing the band. And on November 6, 2018, Speedealer, along with Hirshberg, entered into Sonic Dropper Studio with Daniel Rey and Jim King at the helm to record its sixth studio album, Blue Days Black Nights (self-released May 6, 2019). Speedealer is currently touring in support of Blue Days Black Nights.

The band's musical influences include but are not limited to The Butthole Surfers, Motorhead, The Misfits, Alice Cooper, ELO, Black Sabbath, and Judas Priest. 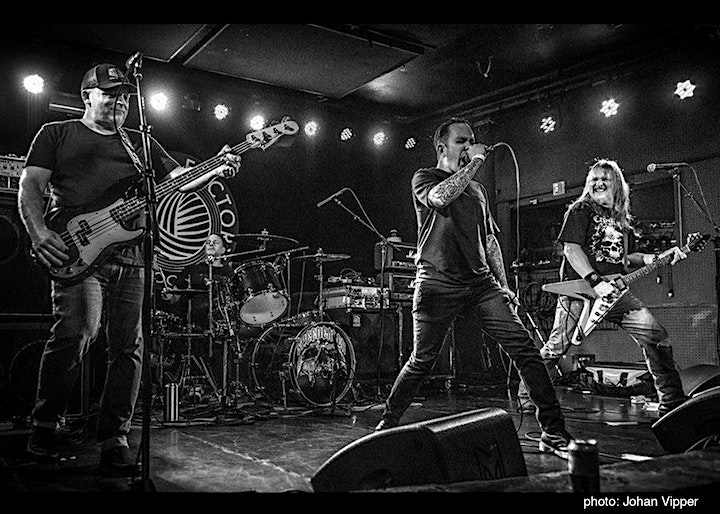 Six-piece Detroit-based band previously known as The Wildbunch. They play what has been described as an energetic and unique brand of rock music infused with elements of garage, disco, punk, new wave, and metal.
Speedealer