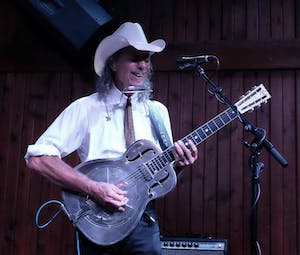 Nestled deep in the Texas Hill Country, just outside of Fredericksburg, you’ll find a former gas station turned restaurant & music venue named the Hill Top Café. A visit to this eclectic café gives a good idea of the worldly, yet down-home nature of Johnny Nicholas’ unique style. Built piece by piece, recipe by recipe, and song by song by Johnny Nicholas and his beloved late wife Brenda, the Hill Top Café is covered in music memorabilia and old photos from his nearly five decades of touring. The décor, home-cooked food, and tunes on the old jukebox give a glimpse into the vast melting pot of Americana that define not only the food at the Café, but the incomparable musical style of Johnny Nicholas.

Often referred to as a ‘bluesman,’ to classify Johnny Nicholas as strictly a blues artist is quite a misnomer. Nicholas’ signature style of music might be better defined as deep roots music. His musical roots grow deep and wide – spanning the many musical traditions found across the country. Drawing from the wealth of musical influences found in areas such as Chicago, Louisiana and Texas – Nicholas’ original music stirs together elements of folk, blues, western-swing, jazz, Cajun and country. While his dexterity on the guitar, husky growl of a baritone, and talent on the 88’s make him well at home in the world of blues and jazz, Nicholas’ skill as a songwriter, multi-instrumentalist and performer of authentic Americana music is not to be understated. Having written “the first song he was proud of” in the early 1970s at the encouragement of his friend and mentor Robert Lockwood Jr. – Johnny Nicholas has been writing his own brand of organic, deep roots music for nearly 50 years.

Born in Rhode Island, Nicholas’ early influences of Howling Wolf, Bob Dylan, Ray Charles and The Band as well as his love of Chicago Blues and New Orleans music mingled with traditional music of the Greek community of his childhood. In 1964 while a freshman in high school, Nicholas officially started his first band The Vikings. In the historic year of 1969 he helped form a band in Providence called Black Cat – a collaboration with his friends Duke Robillard, Frannie Christina, Larry “Slow Drag” Peduzzi, and Steve Nardella. The group made a pilgrimage together to the now legendary 1970 Ann Arbor Blues Festival, but shortly thereafter the band amicably diverged into two groups. Robillard started Roomful of Blues and Nicholas started the Boogie Brothers with Nardella and Christina. As 1970 rolled around, Nicholas found himself living outside of Ann Arbor in what was little more than a shack they dubbed The Apple Grove. This little home became known as a friendly place where Chicago bluesmen and other like-minded artists and outlaws could stay while playing in Ann Arbor. The Boogie Brothers became a mainstay of the town’s burgeoning roots music club scene and Nicholas became a regular at the 1972, ’73 and ‘74 festivals in Ann Arbor. During this time, he also made his recording debut on Atlantic Records, performing with the Boogie Brothers on a double album compilation of the 1972 Ann Arbor Blues and Jazz Festival - singing one of his songs and backing up Boogie Woogie Red and Johnny Shines.

After playing a gig with Commander Cody at the Hill Auditorium in Ann Arbor, Cody suggested that the Bay Area would be a better home base with a larger audience. So, Nicholas, Christina, and Nardella piled into their VW bus and headed to Oakland where Cody introduced Nicholas to the members of Asleep at the Wheel – who were also recent transplants to the Golden State. While Nicholas still called the Apple Grove home, and California became his band’s headquarters for a spell, his ramblings across the country certainly didn’t cease. Nicholas’ desire to seek out his musical heroes soon took him to the Gulf Coast and southern Louisiana where he discovered Clifton Cheniers’ magical Zydeco band as well as Cajun music and swamp pop. Finding a parallel between Greek culture and Cajun culture – both love good music and good food –

Nicholas was quick to make friends. Doug Sahm introduced him to Link Davis Jr., son of classic Cajun fiddler Pappa Link Davis, who wielded a mean saxophone and loved to play the blues as much as Cajun music. Davis had recently joined Asleep at the Wheel and Nicholas found himself performing alongside not only Davis, but renowned Cajun artists Nathan Abshire and Dewey Balfa.

As Nicholas’ reputation grew among some of the more veteran bluesmen of the time, he found himself billed at the 1974 Ann Arbor Blues and Jazz Festival as ‘Johnny Nicholas & The Chicago Blues All Stars with Big Walter Horton, Hubert Sumlin, Mack Thompson and S.P. Leary.’ The same year, Asleep at the Wheel packed up and moved their operations to the budding music scene in Austin, Texas. While Nicholas still didn’t call Texas home yet, he often found himself down in the heart of Texas performing alongside his old friends and the scene’s many cosmic cowboys, as well as hanging out and playing at the original Antone’s “Home of the Blues” on sixth and Brazos. In 1975, Nicholas finally turned the Apple Grove over to a friend to spend more time in Chicago, South Louisiana and Austin. Rambling back and forth between these music hot spots – Nicholas hopped freight trains and hitch hiked his way around the country. While spending time in south Austin, he began recording informally with some of the boys from Asleep at the Wheel in Ray Benson’s living room, adding the trove of recordings he had made with Johnny Shines and Big Walter Horton back in his Detroit & Ann Arbor days.

The year of 1977 saw the release of Johnny Nicholas’ first solo album – Too Many Bad Habits – on Blind Pig records. A year later, Nicholas officially moved to Texas and joined Asleep at the Wheel. While with the band, he was a featured vocalist on the band’s album Served Live on Capital Records and Asleep at the Wheel earned their first Grammy for a cover of Count Basie’s “One O’Clock Jump.” Served Live’s “Jumping at the Woodside” was also nominated for a Grammy. While off the road with The Wheel, Nicholas and Link Davis Jr. would return to Basile, LA to play with Nathan Abshire, Johnny Spain, Dewey Balfa and other artists in the Acadian neighborhood. Nicholas remained active with Asleep at the Wheel until 1980. His final performance with the group coincided with the famous closing night of the Armadillo World Headquarters in Austin on New Year’s Eve of 1980.

Later that June, Johnny and Brenda (who he had met a few years earlier at Antone’s Night Club) married in Fredericksburg, and Nicholas officially began to call Texas home. They purchased that old old gas station just outside of Fredericksburg and spent the next several decades mixing Johnny’s music and Brenda’s cooking with a lot of love to form the Hill Top Café. Since Brenda’s passing in 2016, Johnny has continued to host phenomenal music and the finest food in the Hill Country at the Café.

Johnny Nicholas’ music, much like the Hill Top’s menu, is a melting pot of American roots traditions, a dozen different cultures, and – most importantly – a lot of kindness and love. When not on the road, Sunday mornings find Nicholas (or one of his many talented musical cohorts) hosting a “Gospel Brunch” at the Hill Top – with music and food to fill your soul. 2018 saw the re-release (and Grammy-nomination) of Nicholas’ debut album Too Many Bad Habits as a special double vinyl box set. He continues to tour across the United States – often traveling back to his original stomping grounds in Rhode Island and the east coast. Still calling central Texas home, Nicholas’ residency at The Saxon Pub in Austin, Texas with his band Hell Bent is a must- see show – often featuring some of the talented friends he has amassed over the years. 2019 took Nicholas overseas to both Hawaii and France – as well as on multiple east coast and west coast tours. Still showing no signs of slowing down in 2020, you can catch Johnny Nicholas at your favorite listening rooms, dance halls and festivals across the country. With several album projects in the pipeline, fans can only expect more original deep roots music from the incomparable Johnny Nicholas.