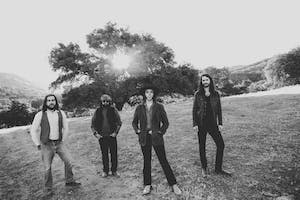 performances across Southern California and beyond. Solidified by

their debut West Coast tour in 2015, the band has now earned an

unrivaled reputation atop their

Endurance is their vocation and

into a new era is their mission.

Launching into the new decade, the

momentum of the Mrs. Henry mothership is showing no signs of letting

THE LAST WALTZ, January 24th saw the unleashing of the group’s second

live album, “Live at the Casbah”, tracked a year prior at the iconic

37-minute release is a testament to the explosive live performances

that have defined Mrs. Henry. With eyes fixed to the horizon, the band

is now gearing up for the release of a new single and music video, a

concert series honoring the Music of the Band, as well as the launch

the States. With another live album, “Live at the Pourhouse”,

scheduled for release in Spring of 2020, Mrs. Henry continues to prove