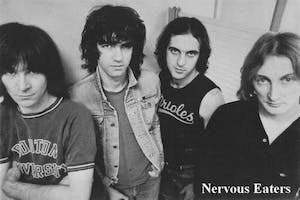 RocknRolls best kept secret has to be the Nervous Eaters and with their new release through Penniman Records, everybody in on it.

Coming out of the pre-punk Boston rock & roll scene, Nervous Eaters were as tight and professional as any working band around, with links to Willie Boom Boom Alexander and legendary blues harp player Tony Cagnina and regular gigs at The Rat. They roared through the punk era, opening for national and international acts, then toured on their own, and just kept going.

Some of this Boston bands amazing songs, released as singles in the mid-70's, have already seen the light of day on various punk comps, most notably Loretta and Just Head have been elevated to the status of nuggets and are counted as fave tracks amongst legions of fans of this genre. However, these songs are only the tip of the iceberg of an output full of talent and limitless rage.

Now, nearly 30 years on, Penniman is immensely proud to present Eaterville Vol. 1 destined to be THE RECORD to do true justice to the band and earn them the dues they richly deserve as one of the best ever R'n'R bands. This compilation brings together rare stuff recorded between 1973 and 1975!- from studio sessions and demos along with their official Rat singles and their fans favourite songs: Degenerate or You Smell Like Fish. Also included are demos like YouVe Heard These Chords Before or Planet Fever on which the singer/songwriter Steve Cataldo and co. place themselves on the crucial dividing line between the best Stones and the Stooges. This is the missing link that we've all been seeking and its now ready and waiting for your ears. Eaterville Vol.1 brings to light the strength of wild and hi-voltage sound bearing witness to a band too raw and too good to be successful.

In 180 gr vinyl and gatefold sleeve, the record includes a double page insert with liner notes notes, an interview with Steve Cataldo, as well as track by track notes provided by the great Steve himself. Also available on CD, with cardboard packaging and 24 page booklet with the same info.