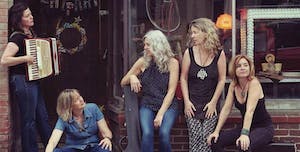 Inspired by playing and singing each others songs at their own "porch parties", these established Boston area musicians and singer/songwriters decided tcombine their individual talents and create their own brand of Urban Folk, Country and Blues. They took their act on the road and "Porch Party Mamas" was born. All are seasoned players, each with their own pervasive individual music persona and critical accolades. Between them, they have shared the stage with a distinguished litany of artists, including Willie Nelson, the Indigo Girls and Lyle Lovett.

Felicia is a tour de force of musical abilities and creativity. Raised in Oklahoma and Texas in a household where her mother and piano teacher were one and the same, Felicia started early on the road to her unique musical style and expression. She benefited greatly from the public school music program in Amarillo, Texas in which she sang, and played piano and upright bass. After earning her degree in classical piano at Texas Tech University, Felicia was recruited to Boston University where she earned an Artist Diploma in piano performance. Felicia wields a smokin accordion and is an accomplished singer, songwriter, and multi-instrumentalist with two beautifully crafted CDs to her name, Magazine Street and Pretty Soon.

Jane Grondin- fiddle, guitar, vocalsJane grew up in Texas, studying classical violin and piano. As a teenager, she picked up the guitar and started writing and performing her own music. While still in highschool, she performed as a young singer/songwriter all around Houston, including the famed folk club Anderson Fair. After graduating highschool, she toured and recorded with the popular Texas progressive country-rock band, Dogtooth Violet. With this group, she shared the stage with musicians such as Lynard Skynard and Louisiana & Texas Blues man Clarence Gatemouth Brown. Jane spent her years as a 20-something in LA, where she married and started a family. She eventually ended up in NH, where she raised her family and became a music teacher, specializing in young children. As her children grew older, she took up celtic fiddling and learned Irish & Scottish fiddling styles. She has performed in several Renaissance Fairs and various musical theatre formats. She eventually made her way back to her singer/songwriter roots by becoming the newest member of the Porch Party Mamas.

While getting her degree in classical guitar at U Conn, Ksenia covered the local bar circuit and gave numerous interviews on college radio stations, and opened for Arlo Guthrie while still in her teens. Ksenia moved into the Boston music scene, and developed a strong solo career with regular appearances at Passim, Cape Cod Melody Tent, Music Circus, and Paradise Rock Club. Over the course of her career, Ksenia has opened for Willie Nelson, Indigo Girls, Warren Zevon, Marc Cohn, Robert Cray, The Guess Who, Kate and Anna McGarrigle, Ferron, Paula Poundstone, Aleka`s Attic, Aimee Mann, and Marti Jones. She has also performed with Patty Griffin and Catie Curtis, and was a Lilith Fair Finalist.

A powerful percussionist force in her own right, Katrin integrates the powerful rhythms of South America with the necessities of American Folk music. A Swiss national, she received her formal training in music and percussion in Germany and Holland and continued her studies in Brazil, Cuba and New York. She has performed extensively and has appeared on radio and TV including The Late Show. Her debut CD weightless was recorded in New York with Jazz giants Danny Gottlieb and Mike Richmond amongst others.

Kelly sings her heart out and plays guitar and bass. She is a Berklee College of Music Alum and an Award-Winning performer and songwriter. Among her accolades: TOP WINNER, Nashville Songwriter's Association International Competition; HONORS AWARD WINNER, Great American Songwriting Contest; FINALIST, Lilith Fair Competition; GRAND PRIZE WINNER, Providence Song Slam. Kelly has also opened for some notable musicians, including Willie Nelson and Lyle Lovett. Songs from her first CD, "Live and You Learn" have been featured nationally and internationally on TV programs such as "The Young and the Restless" and "One Life To Live".

From the age of 5, Arlene has an affinity for music. Born in New Haven, CT of cuban immigrant parents, Arlene flourished from the many perspectives of a multicultural upbringing. Listening to American and Latin music from a very young age, Arlene immediately began to write her own compositions opting out of learning the tired lessons of her highly frustrated but patient piano teacher.

As singing came to her naturally, she honed her talents by practicing to her favorite albums daily. During her early teens, Arlene picked up the guitar and taught herself the instrument by listening to artists such as Heart, Led Zepplin and The Runaways.

Upon the advent of 4 track cassette recorders, Arlene immediately began putting down her ideas for her original songs. These early recording sessions prompted her to continue on into the world of computer based recording programs which opened up to her new found love of music production. Arlene was fascinated by emerging techno based music which was starting to bloom in the New York club scene. Many of these recordings are reminiscent of the keyboard melodies and drum loops created by dance enthusiasts of yesterday and today.

During her early 20s, Arlene joined Vertigo, a four piece original band from Hartford, CT. She shared vocals and played guitar or keyboard, whichever was necessary. She and the bands guitarist would record constantly, coming up with the idea to capture anything that happened in one session. This is basically what is now coined as speed songwriting. The challenge was fun for both of them because the outcome was so creatively satisfying.

As with many bands, Vertigo went their own ways in the early 90s. Arlenes next adventure was fronting Little Queen, the Ultimate Heart Tribute. Upon the bands breakup, Arlene then joined two different groups where her talents lent her to singing as well as a new opportunity to play bass. Milk, an all original female power trio brought a new audience to Arlenes original material. The second endeavor, the Unexpected, a three piece band that featured Arlene as a female powerhouse singer/ songwriter / bassist performed originals as well as covers and offered her a fun alternative with her male counterparts to the more serious pursuits of Milk. Both of the bands released CDs which are now sought after collectors items.

In 2006, Arlene decided go the solo route full time. She took a leap of faith and quit her unfulfilling daytime career to pursue the passion of her dreams. Here is where her nickname ArleneWow! was discovered. It seemed that wherever she performed her audiences would be slack-jawed and say Wow, that was awesome, Arlene! Her friends and fans then began calling her ArleneWow! and the rest is history.