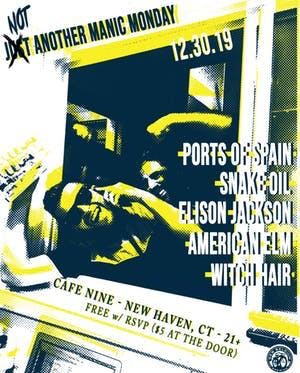 iCal
Google
Free with RSVP ($5 at the door)

From the back of the bar, Ports of Spain instantly scan as a full band, so it's a shock to discover their mathy shoegaze-pop is constructed by just two musicians . Ilya Gitelman uses octave pedals and loops to play lead, bass and rhythm guitar simultaneously, while Sam Carlson contributes vocals, keyboards and drums. Don't be fooled -- Ports of Spain are not another band that trades directionless loopy jazz odysseys for pure songcraft. Their equipment never gets in the way of their complex melodies. They write actual songs, consistently avoiding complication for the sake of complication. They juggle tons of ideas in every song, creating a noise that's consistently about to fall apart. That it doesn't is incredible by itself. Their brilliant songs may seem like a bonus under these circumstances, but don't underrate Ports of Spain. Even as these two guys spew chaos into crowded clubs, their songwriting is always there to remind you why a grounding in planned songcraft keeps so many of the best bands tethered to excellence. Ports of Spain belong in their company. Ports of Spain have played with bands like The Dodos, Tera Melos, Hospitality, Beach Fossils, Fang Island, Pissed Jeans, Pile, ONWE, Speedy Ortiz, Morning Teleportation, Kal Marks, The Paper Kites, and Solids.

Snake Oil was established in 2011 by Jason Labbe and began as a collective of over a dozen musicians, living all over the country, who used home recording technologies and file sharing to collaborate on three hard-to-categorize instrumental releases: a self-titled LP, a 7” EP, and a second LP titled The Train is White and the Moon is Strong. Over the next several years, a core line-up of musicians emerged and Snake Oil regularly took to the stage, sharing bills with bands as diverse as Mates of State, Acid Mothers Temple, and Deerhoof. A commission by NPR’s Story Corps brought the band out of a short hiatus with a new line-up. Snake Oil’s long-awaited new LP, Dying of Sunsets, is out now on Safety Meeting Records. Departing from their usual recording process, the new LP was tracked live to 2” tape at Brooklyn’s Seaside Lounge by Charles Burst and Jason Labbe. This record also marks a drastic stylistic change for the band: the new material features vocals by keyboardist Emily Lee (Shearwater, Loma, Stephen Brodsky) and new guitarist Kelly L’Heureux (Atrina). Their vocally-driven arrangements act as compliment and counterpoint to the fuzzy psychedelic instrumentals, continuing to draw on influences ranging from Sabbath to CAN to Bitches Brew.

Elison Jackson is a garage-folk band based out of New Haven, CT that started in 2010.

"First there’s just a chiming guitar, picking out plaintive, atmospheric chords. A second guitar unleashes a denser set of notes on a splash from the drums. Then the rhythm falls in as both guitars and bass take off into a hazy splendor. Even when the drums double-time it for the chorus, and the vocals bounce on the lyrical hook — the “high” in “somewhere high” stretched out to hah-ee-yah-ee-yah-ee — the song’s sunny fog doesn’t disperse.

Clocking in at only 3:02, Witch Hair’s “Somewhere High” is a song that feels over too soon, which in this case is a good thing. When it’s done, you can just hit play again.

“Somewhere High” is the third song from Out on Love, Witch Hair’s second release since 2017’s You Are Not a Surface. In that time, Witch Hair has become a steady presence in New Haven’s music scene, and Out on Love makes it easy to understand why. Joe Russo (vocals and guitar), Ashley Kenney (vocals and bass) and Tom Connolly (drums) are a fully developed power trio, able to fill a club with a roar and also drop down to a whisper.

Their songwriting, meanwhile, balances tunefulness and dissonance, sweetness and murk. Alongside “Somewhere High” summery shimmer is the sharp squall of “Halo,” the album’s raucous opener. Where “Cracked Pavement” finds the band’s drone at its richest, “Say Anything” boasts an arrangement that has the band almost genre-hopping into straight-up dance music. And parts of “Motorcycle I” and “Motorcycle II” have the sneaky, tense feel of a spy movie.

Then the album’s closer, “You Are Not a Surface,” feels like a summation of the seven songs that preceded it. It takes the most chances with an expansive arrangement that pays off as the trio fills their biggest sonic space yet. “Welcome to my house, take a look around,” Kenney and Russo sing together. On Out on Love, you can feel right at home."

Reese Florence is a singer-songwriter from NYC. Their unique sound combines de-tuned baritone ukulele with a powerful voice, which can fluctuate from delicate to soaring in the span of a verse. Newly transplanted to Philly, they have been ingrained in the Philly songwriter and jam scene since arriving to town earlier this year