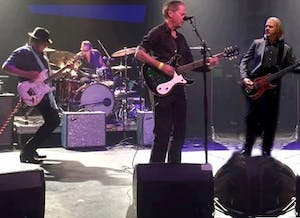 Richard Lloyd is a legendary electric guitarist, singer/songwriter, and founding member of Television, a band that rose to fame with their 1977 debut release, Marquee Moon, widely regarded as one of greatest albums in rock and roll history and perhaps the most defining and highly influential release of the 1970’s New York rock scene. Lloyd embarked on a solo career after Television disbanded, releasing seven solo albums and working as a guitarist, session musician, and band member with Matthew Sweet, John Doe, Rocket from the Tombs, and more.

Released in October 2017, Lloyd’s book, Everything Is Combustible: Television, CBGB's and Five Decades of Rock and Roll: The Memoirs of an Alchemical Guitarist establishes Lloyd as a masterful storyteller and humorous and insightful writer with an acerbic and razor-sharp wit.

Happy Ending was formed by songwriters Hank Hoffman and Jay Mundy. After getting together occasionally for a couple of years to play each others' lyrically dark but earthy rock 'n' roll--as well as classic 1960's covers and extended free-form abstract psychedelic jams--they recruited several friends to record an album.

and unemployment with what reviewer John Morthland called "charging hard rock or folk rock with dueling guitars, psychedelic overtones and nods toward Chuck Berry and Bob Dylan," "Have A Nice Day!" was released as a vinyl LP with an accompanying 7-inch 45 and lyric/collage booklet. In Op magazine, editor John Foster termed it "a future cult item for the collectors...if there is a future."

Alas, there wasn't much of a future for the original lineup. After two shows at the legendary New Haven club The Grotto, bassist Jeff Fisher moved out of state and songwriter Jay chose the contemplative life of the hermit.

When not recording as his psychedelic pop alter ego The Alex Butterfield, Hank Hoffman has continued the Happy Ending brand with an evolving cast of musicians ever since, releasing the CD "Smile For The Camera" in 1996 and playing New Haven clubs like the Grotto, the Moon, Cape Codder, cafe nine, Tune Inn and the Best Video Performance Space. On May 27, 2006 the

pop to fuzzed-out psychedelic freak-outs. The group also throws cover songs into the mix, running the gamut from the Left Banke's "Walk Away Renee" to Iggy & the Stooges' "Search and Destroy." An occasional highlight is an incendiary version of The Beatles' "Helter Skelter."