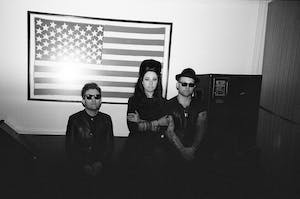 iCal
Google
Goth Country all the way from the Music City

Spiritus Mundi.​ The source of all inspiration, where art exists before artists are granted the spark to bring it into the world. Spiritus Mundi – it’s how Nat Rufus formed The Bad Signs.

How else can you explain a West Virginia hillbilly going goth-punk at the bad luck age of thirteen? How else could his second-hand cassette collection be comprised of nothing but his father’s Elvis and Patsy Cline tapes, and his cousin’s bootlegs of The Misfits and The Cramps?

Inspiration begot inspiration. Nat and his twin brother, Rob, started a punk band later that year. Nat sang and played guitar. Rob played drums. Both wrote songs. Their punk dual​equency sent shockwaves through Appalachia and beyond. By the time they were seventeen, they’d garnered national attention and slots on the Warped Tour.

Then tragedy struck. Rob was diagnosed with Stage Four cancer. The years that followed were spent in cancer wards and operating rooms. But after years of treatment and surgeries, Rob learned to play drums again . . . Nat started writing songs again . . . the boys were back.

In 2016, Rob immortalized their coming-of-age struggles in his memoir, ​Die Young With Me​ (Simon & Schuster). The book was a critical and commercial success. Rob was asked to adapt the book for Netflix with VMA-winning director Emil Nava. The crescendo hit in 2017 when Rob was awarded the American Library Association Medal.

The book threw the door to their past wide-open. Nat stepped through it.

He re-lit the spark: ​Those corrupting cassettes, Elvis, The Cramps, Patsy Cline, Misfits . . . The idea for a new band was born. It would be a collision of first loves, a hillbilly goth-punk’s ode to all that is cool. It would be as pure as music could be, as ​bad​ as music should be.

It would be THE BAD SIGNS.

Nat began writing and honing the vision. Rob was behind the kit, co-writing and co-conspiring. But a piece was missing . . . her name was Samantha Harlow. She tended bar and sang at ​Robert’s Western World​, the rowdiest honky-tonk in Nashville. A punk singer and a haunted honky-tonk angel may at first seem unlikely co-vocalists, but their voices blended eerily well.

The trio began playing shows and recording. Things clicked right out of the gate.

2020 brings new chapters to The Bad Signs. Rob’s new book ​The Vinyl Underground (Northstar Editions) will be released in March

https://www.pastemagazine.com/articles/2019/09/rob-rufus-the-vinyl-underground-young-ad ult-reveal.html​ . The band recorded a companion track for the book titled ​Vinyl Underground which is streaming now at all the usual outlets worldwide.

Johnny Cab is an American Psycho Punk band, from Hartford, CT. The group formed in 2016 when Chris Indigo (vocals), threw a Halloween party at his apartment and longtime friend David C. (guitar), showed up by surprise. In between emptying the punch bowl and bobbing for apples, the two decided to start a new band. They put a out call for a rhythm section. Tim Elsishans (drums) and Jeremy Smith (bass) jumped on board to complete the line up.

Their fast rising energetic sound is quickly gaining them recognition on the East Coast. Their psycho punk style is heavily influenced by the first-wave 77 sound. If you like early punk rock with a strange, zippy approach, then check these guys out.