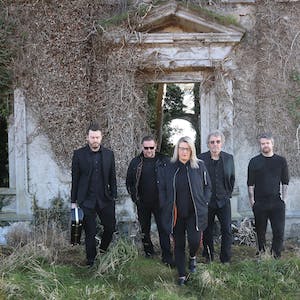 Having spent the last two years writing and recording The Lost Messiah’s second album ‘Deconstruction of the Mind’, founding member and songwriter Ollie Plunkett describes the writing and recording process as both liberating and all consuming.‘ Once you throw yourself head first into the process you embark on a journey of exploration, never knowing where it will lead you to.’

His latest creative journey has yielded 10 original songs delivered with a rich palette of atmospheric guitars, dark and brooding synths and driven by a relentless hypnotic rhythm. Meditations on love, loss and a search for life meaning permeate the tracks on this album.

‘The deconstruction of the mind, the segue to a place

The silence, the fall, the breaking of the mould

The colours all explode, the wonder of it all

The Lost Messiahs hail from Portlaoise, Ireland and now with some line-up changes head out on tour to promote their new album. The tour will take them to venues all over Ireland before they head to America for a series of dates in in April, 2020, following by a string of festivals in Europe in May and June. The band is made up of experienced musicians who have shared stages in the past with major acts including: Van Morrison, The Waterboys, Bob Geldof and the Vegetarians of Love.

The group has clearly internalized Ollie’s conception in a profound manner, demonstrating remarkable intimacy and grace in its execution, and always sound like they are hardwired to the creators circuitry, truly extending his vision without surrendering individualism” “There’s a lot of trust, and there’s a lot of willingness to let go of what was supposed to happen and go with what is happening in the moment,” Plunkett says.

The Lost Messiahs have released two singles from ‘ Deconstruction of the Mind’ . The first ‘Lights Out’ a brooding opus with a Mercury Rev vibe, followed by their latest on which with they collaborated with Greg Calbi, Sterling Sound, New Jersey whose credits include The National, Interpol, War on Drugs.