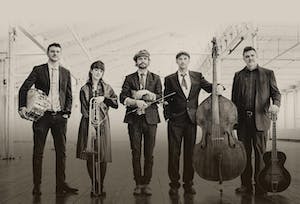 The Lucky 5 is a hard-swinging jazz band that blends swing and gypsy jazz to create a unique, foot-stomping blend of music that appeals to a wide range of music lovers. The band is comprised of highly seasoned touring musicians, having been part of The Hunger Mountain Boys, Lauren Ambrose & The Leisure Class, and traveled, performed and recorded with artists such as Peter Gabriel, Tony Bennett, Neko Case, Iris Dement, Bobby Previte, Del McCoury, Jim Lauderdale, just to name a few.

The Lucky 5 brings verve, high energy, and an unpredictable impulse to the tradition of jazz from the 20's, 30's and 40's, grooving deeply, and keeping feet moving on the dance floor.

If you have not had the chance to spend an evening with the FABULOUSNESS that is THE LUCKY FIVE, then you really don't know what you're missing. They are 5 GIFTED MUSICIANS who are altogether TRANSPORTING and AMAZINGLY FUN!! If you like Jazz, historic music and fun, then you'll love The Lucky Five as I do!! —Wanda L. Houston, Singer, The Wanda Houston Band

Alexa Rose has the rare ability to find strikingly original melodies that nevertheless sound like they must have existed for a long time, stored away maybe in the ether of creativity, self-evident and awaiting discovery. Moving deftly between complex dexterity and heart-tugging familiarity, Rose achieves a sound that is pure and maintains the brassy attitude and simple refrains that run straight through American roots music from mountain ballads to rock n roll.

Amidst the sea of earnestly soft-sung songs on the Americana circuit, Rose’s voice stands out with depth and complexity, capable of gymnastic yodels and deep resonance. She cultivates her own hard-working perspective without imitation or posturing through a tangible, relatable sense of hunger and realism about the sacrifices of the road, the elusiveness of fulfillment, and the bittersweetness of dreams.

Alexa Rose was born in the Alleghany Highlands of western Virginia, raised in the tiny railroad town of Clifton Forge. Though no one her immediate family played or sang, she inherited a deep musical legacy.

“Growing up I would hear stories of my great-grandfather Alvy who, for a time, lived and played with [bluegrass great] Lester Flatt when they were both young men,” says Rose. “Apparently, Lester tried to get him to move to Nashville and pursue a career. But my great-grandfather decided to stay in the mountains with his wife on their farm.”

“There are so many musicians where I’m from, people who just play on their porch or in some local bar — and they’re amazing. They don’t do it commercially, that’s not the essence of what they do. There’s a deep connection between their sense of place and the music they make. That’s what really inspires me about the musical culture in the South and the mountains, especially.”

That visceral connection is at the core of Rose’s debut album, Medicine for Living (Big Legal Mess). A stunning ten-track effort, it finds the 25-year-old singer-songwriter bringing a wellspring of tradition to bear on an enlivening collection of contemporary roots songs.

A mostly self-taught musician, Rose picked up the guitar as a teen. “I always grew up with traditional mountain music in my ear and in my community, but I don’t think I actualized its influenced on me until I moved to North Carolina in 2013.” It was there, as a music major at Appalachian State University, that Rose was fully exposed to a wealth of old time music, regional stylists like Doc Watson, and most crucially, the ancient folk ballads carried over from the British Isles.

“Those traditional songs are presented in a stark way that preserves the stories. It’s all about the storytelling,” she says. “That really affected the way I started crafted my own songs and how I sang.”

Despite her studies, playing music was never a bloodless academic pursuit for Rose but rather a deeply intimate act. “I was a bedroom singer and songwriter. I didn’t perform out very much. Music was a very personal practice. I used it as something to come home to at the end of the day, and it always made me feel better. I don’t think I ever really considered it as a ‘career’ or had ambitions of performing – I was maybe like my great-grandfather in that way.”

But after graduating in 2016, Rose decided to take a leap, throwing herself into touring, playing as she explored the highways and byways of America. “I quit my job and started traveling and playing shows anywhere I could. That’s what I’ve done that the last three years. Going around that way – driving around in a beat-up van, earning very little money – you find yourself staying in truck stops, sleeping on people’s floors. You meet a lot of interesting folks that way. That experience informed the songs I’ve written.”

“In a way Medicine for Living is about all lessons I’ve learned, of people and places that have shaped my worldview and my definitions of love and commitment. There’s a lot of tension between wanting to leave your home and go out into the world, and the roots that pull you back.”

Through her association with Tim Duffy – head of the non-profit Southern music preservation organization, Music Maker Relief Foundation — Rose was brought to the of Big Legal Mess label head Bruce Watson. He signed Rose and brought her to his Memphis home base to cut her full-length debut. “This album is Appalachia-meets-Memphis,” says Rose. “The stories and inspiration emanate from the mountains, but the tracks have all these different musical elements coming in.”

Recorded at Watson’s Delta-Sonic Studio, Rose is backed by a crew of Bluff City all-stars including a core band led by legendary guitarist Will Sexton, drummer George Sluppick and bassist Mark Edgar Stuart, with guests including organists Rick Steff (Lucero) and Al Gamble (St. Paul & The Broken Bones), among others.

“The funny thing was I hadn’t met any of them at all before we started recording,” says Rose. “You know, playing your songs for someone in a studio is like getting naked in front of them; it’s a very personal thing to do. But when you play music together, you skip all the normal steps of a relationship immediately go to this really close place with people.”

Album co-producers Watson and Clay Jones (Modest Mouse, Buddy Guy) decided to keep the sessions feeling as fresh and immediate as possible. “None of the musicians had heard any of the songs or even heard me before we started. Bruce really wanted to capture their gut response to the music,” says Rose. “What came out of that was really cool – the songs moved and took shape in totally new and different ways. We sorta let the songs be like taffy – we let them get stretched and pulled however they want to get shaped.”

In an era where the term Americana has lost much of its meaning Medicine for Living is just that: a fully realized, multi-layered merger of old country music, traditional folk songs, colored by rock and roll and mountain soul. “There’s a lot of people I’m influenced by that show up in the songs in different ways,” says Rose. “Whether it’s Gillian Welch or John Prine or Townes Van Zandt, or even someone like Alynda Segarra from Hurray for the Riff Raff.”

Although the material spans a five-year period of Rose’s writing, Medicine for Living ultimately works as a unified song cycle. “The theme of the album is the commonality of sorrow in the human experience,” she says. “I find a lot of beauty in everyday life. How we look upon the small things, and how we handle those larger obstacles that stand in our way.”

“Some of the songs are about being in a dark hole that life puts you in, and some of them are about pulling yourself out of that rut. It’s about that journey and how we nurse ourselves through it. And how love, ultimately, is the best medicine.”