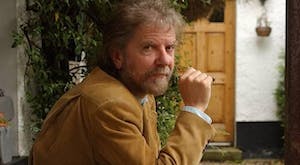 Legendary musician and peacemaker Tommy Sands, one of Irelands most powerful singer songwriters, social activist and enchanting performer comes New Havens Cafe Nine. Not to be confused with the pop singer of the 1950s, Tommy Sands was the prime songwriter with the Sands Family, a group with his five siblings that became one of Ireland's most influential folk groups of the 1960s and '70s. Although the group has limited its touring in the early 2000s to an annual tour of Germany and Ireland, Sands has continued to pave new ground as a solo singer/songwriter and as the host of a popular radio show, Country Ceili, broadcast weekly via Belfast's Downtown Radio since 1976.

Sands grew up in a very musical family. His father and six uncles played the fiddle, while his mother played accordion. The family farm, in the foothills of the Mourne Mountains, was one of the few places that Protestants and Catholics joined together to listen to music and dance. Sands began writing songs shortly after learning to play the fiddle. Many of his songs reflect the political turmoil and sociological struggles of his homeland.

Although Sands attended college to study theology and philosophy, music proved too great a lure. Dropping out of the school, Sands began to walk the 120 miles home. He hadn't gotten far when a car with his siblings stopped to pick him up to perform a concert. Inspired by the Clancy Brothers, the Sands Family (Tommy, Eugene, Ben, Colum and Anne) became leaders of the Irish folk revival.

The Sands Family first came to the United States in 1970, after winning a concert trip to New York in a national ballad contest. After performing at Carnegie Hall, the group hooked up with a manager in Boston and remained in America for six months. Returning to Europe in 1971, the Sands Family found that they had acquired an enthusiastic following in Germany.

The Sands Family's string of success ended in 1975, when youngest brother Eugene was killed in an auto accident. Subsequent tours found the three remaining brothers and sister Anne continuing to perform together.

Tommy Sands' debut solo album, Singing of the Times, released in 1985, included his now-classic tunes "There Were Roses" "and "Daughters and Sons." Sands' second album, Down by Bendy's Lane: Irish Songs and Stories for Children, followed three years later. On his third album, Hedges of County Down, released in 1989, Sands focused on traditional Irish material. He returned to original songs for his fourth effort, Beyond the Shadows, released in 1990. Sands' fifth album, The Heart's a Wonder, released in 1995, included a tune, "The Music of Healing," co-written with American folk singer Pete Seeger. The song was used as an anthem for a "Citizen's Assembly" that Sands organized in Belfast, in August 1986, which included many of Ulster County's top artists and literary figures. The Heart's a Wonder also marked the first time that Sands collaborated with Sarajevo cellist Vedran Smailovic. Sands and Smailovic joined with Irish songstress Dolores Keane on the 1997 title track of the multi-artist album Where Have All the Flowers Gone: The Songs of Pete Seeger. One of Sands' most ambitious projects is a stage musical, The Shadow of O'Casey, that he co-wrote with playwright Sean O'Casey's daughter, Shivaun.

Liz McNicholl grew up in a small village in Co. Meath, Ireland and was using a skipping rope for her microphone at age 3. The love of music continued ever since.

Liz immigrated to the United States at 18 where she spent a short time in Boston and later moved to New York where she worked at Memorial Sloan-Kettering in a Management role in their Physician Billing Department, & later branched off to fulfill her passion in music.

The plan was to be in the States for just a year. Needless to say, she fell in love with America and decided to stay. She has now made her home in Hamden, CT where she combines her experience in Business management and her passion for music and runs a wonderful early childhood music program called Musical Folk in New Haven County (www.MusicalFolk.com).