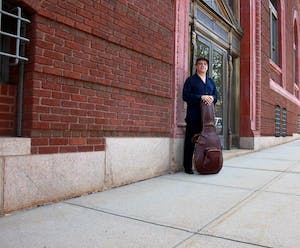 Featuring Dave Anderson on bass and Joel Rosenblatt on drums

Tony Purrone was born and raised in Connecticut. His love affair with the guitar started with his first lesson at age nine. This early ability, expressed across a diversity of styles, led to acceptance by the University of Bridgeport Jazz Ensemble at a very young age. Four years later, whilst still a student, he performed with the Don Elliott Quintet and the Gerry Mulligan Sextet. After transferring to New York University, Tony graduated with a BSc in music.

In 1978, he came to the attention of Jimmy Heath in Connecticut and was invited to join the Heath Brothers Band, going on to record five albums on CBS and Island-Antilles in between touring the world.

He completed an album in July 1991 with Ed Thigpen on Justin Time records called “Mr. Taste”. This received the accolade of a Downbeat magazine 5-star rating.

Tony has taught music at Housatonic College and Wesleyan University in Connecticut and at Queens College in New York. Tony participated in two Grammy nominated albums, “Heath Brothers Live at the Public Theater”, (1980); and “Jimmy Heath-Little Man, Big Band” (1994). Tony has also recorded with Jimmy Heath on the Landmark, Verve, and Steeplechase labels, Ed Thigpen on the Reaction label and is the featured guitar soloist along with bassist, Stanley Clarke, on the song “Dark” co-written with Lenny White on Lenny’s CD, “Present Tense” (Hip Bop records).

In 1993 Tony released his debut CD as a leader and composer on the B&W label (now, Meltdown-2000) entitled, “Electric Poetry”. It features Bob Mintzer (woodwinds), Dave Anderson(bass) and Ray Marchica (drums). His compositions and eclectic diversity figure greatly in this setting.